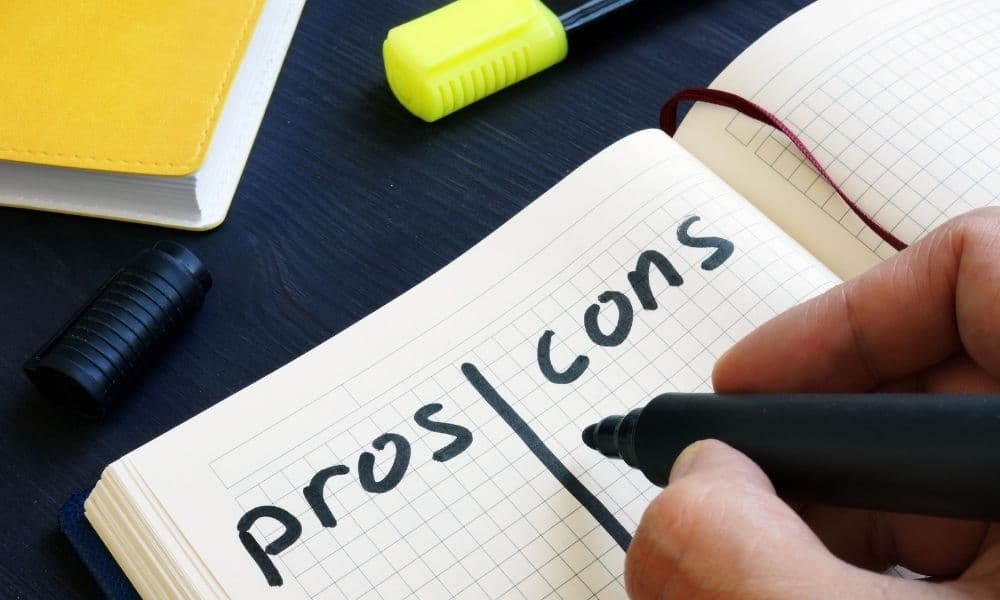 There are many pros and cons of multilevel marketing.

It also comes with its ups and downs and most especially, the negative connotation.

We have all come across an MLM at one point in our lives but some of you might not even know it.

It might have come in the form of some lotions and potions gig or even a home party with clothing or some kind of essential oils.

Some of you might have been intrigued and wanted a sample or more information.

For others, the phrase pyramid scheme might have crossed your mind.

It is what it is and there’s no way around it.

It’s either you join an MLM, love it, and try to make it work or, you avoid it like the plague.

Personally, I try to find the good in anything and everything in life, and that includes MLMs.

I have been a part of quite a number of them, with Melaleuca being my most recent gig.

As much as I tried to make it work, there was always something that held me back.

And that’s why I want to talk about the good and bad that comes with something like multilevel marketing.

So, before you go joining the person who introduced you to one, let’s see what you can expect.

The Pros of Joining an MLM

Some might say that there are zero benefits to joining an MLM.

Some even think they are nothing but a scam that pays everyone at the top of the pyramid.

For me, I try to see the good in every company, unless they are flat out scams.

In most cases – at least with lotions and potions type companies – they are legit and aren’t running anything illegal.

If they were, then we wouldn’t be having this discussion.

But, that’s not the case and that’s why I want to show you what good you can expect if you were to start a multilevel marketing business of your own.

You Are in Control

Not many jobs allow you the freedom to do as you please.

Running a home-based business is one of the few ways it can be done and yes, MLMs are on that list.

You can work a regular old 9-5 and let someone tell you when to come in, or you can start a business, in which you get to decide.

Some people make money mowing lawns, but still, have the luxury of working from home.

Kind of, but you get my point.

Now, some are into network marketing, which requires a lot less dirt.

But, with an MLM, you get to decide when you want to work.

You decide when your days are off, and you get to create your work schedule.

If that’s not cool enough for you, maybe this next point will

You Decide How Much Money You Will Make

What job allows you to determine how much money you will make?

Sure you can move up the ranks and make more money, but with a job, there’s always going to be a ceiling.

When it comes to network marketing, you’re still going to have to put in the work.

But it’s not really work if you’re out there trying to share the products and business that you, yourself actually enjoy.

Now when it comes to income, all you have to do is get others to see things like you do and hop on board.

Get 20 to do that and you are in some serious business.

Then let them get their 20 and you will see that the income potential with an MLM can seriously go through the roof.

You Will Meet New and Like-Minded People

Network marketing can have a bad taste for some but for the more open-minded, it can create friendships.

Not just regular old friendships, but those that can last for a really long time.

That’s how it was with me and my affiliate marketing business until I made it to the Super Affiliate conference in Las Vegas.

Only then, did I get to hang around with others that shared that same interest and spoke the same language.

MLMs can get you to do that too, so just remember that if you ever get discouraged.

The Cons of Joining an MLM

With every good comes the bad.

At least with the majority of things in life.

With MLMs, let’s just say the not so great things, rather than bad.

This way, I don’t scare any of you away.

Nothing is perfect and these lotions and potions gigs are no exception.

So, let’s go over some of the not so nice things about MLMs.

Recruiting is a Must

I have literally seen hundreds of MLMs that claim that you don’t have to recruit anyone to make any money and that’s a bunch of baloney.

When you are dealing with network marketing, there is only one way that anyone will make money.

There is only one way that you and even the owners of the company will make any money.

And yes, that way would be through the recruitment of others.

Without that, you can bet that no one will make a single penny.

Recruiting is Not Easy

Have you ever tried getting someone to join you in anything?

You have to deal with their interest, their other half’s input, and many other parts of life that will ultimately make their decision.

Now, can you imagine trying to tell someone about your latest and greatest MLM?

For one, most people have already heard about them and are not willing to hear you for even just a second.

Two, they might just join you out of pity.

This will then give you false hope in thinking that you can make it work.

They will most likely quit and you will be left with no one, once again.

Recruiting is already a task in itself, but what about retention?

It’s a lot harder than you think, and without something like Easy Profile Profits, the chances of you succeeding in this department are very slim.

Can Be Seen as a Pyramid Scheme

Whether it be legal and legit, most people are turned off when they hear of multilevel marketing.

They don’t like the thought of putting in their hard work, just to make those at the top rich.

That’s not what’s going on exactly, but that’s what most people think.

You have to spend money to make money and I’m sure we can all agree on that.

With MLMs, the investment will most likely come in the form of a monthly payment of some sort.

Pay X amount of dollars to get some products, but most especially, make these payments so that your up-line can make their money.

The same thing goes with you and it’s something you have to be open to.

Without this, how can you expect anyone to build anything?

If it were a one-time payment, you will most likely quit, due to the extremely low earning potential.

“I love the products.”

Those are the kinds of comments you will see from someone who is in an MLM.

They are so caught up in the business, that the placebo effect kicks in.

Don’t get me wrong, some products are at least fair, but none are ever worth the price you are paying for them.

Can Make You Lose Family and Friends

Some might say you aren’t passionate enough about your business and that’s okay.

The reality of MLMs is what it is.

In the process of you building your business, do expect to lose some friendships along the way.

Your family will look at you as the one in that pyramid scheme thing.

Your friends will do whatever they can to avoid your presentation.

This is a con with MLMs but one that you shouldn’t let bother you.

It comes with the business and is one that almost every network marketer has to deal with.

At the end of the day, multilevel marketing will always come with its pros and cons.

If you are considering it, then go for it.

If you don’t think this is for you, then don’t go for it.

I do think that you should at least give it a try, as you never know what can come from it.

For me, I learned the very basics of starting a home-based business.

I couldn’t find a product that I actually liked, but at least I know what to expect.

Without that experience, I would never be able to give you the pros and cons of MLM, now would I?

But that’s not the case, and I hope it has been of some kind of benefit to you.

If you have any questions or you want to leave your two cents, feel free to leave them in the comments section below.

Thanks for reading and remember to never let anyone dictate where you want to be in life.

Unless of course, that someone is God.