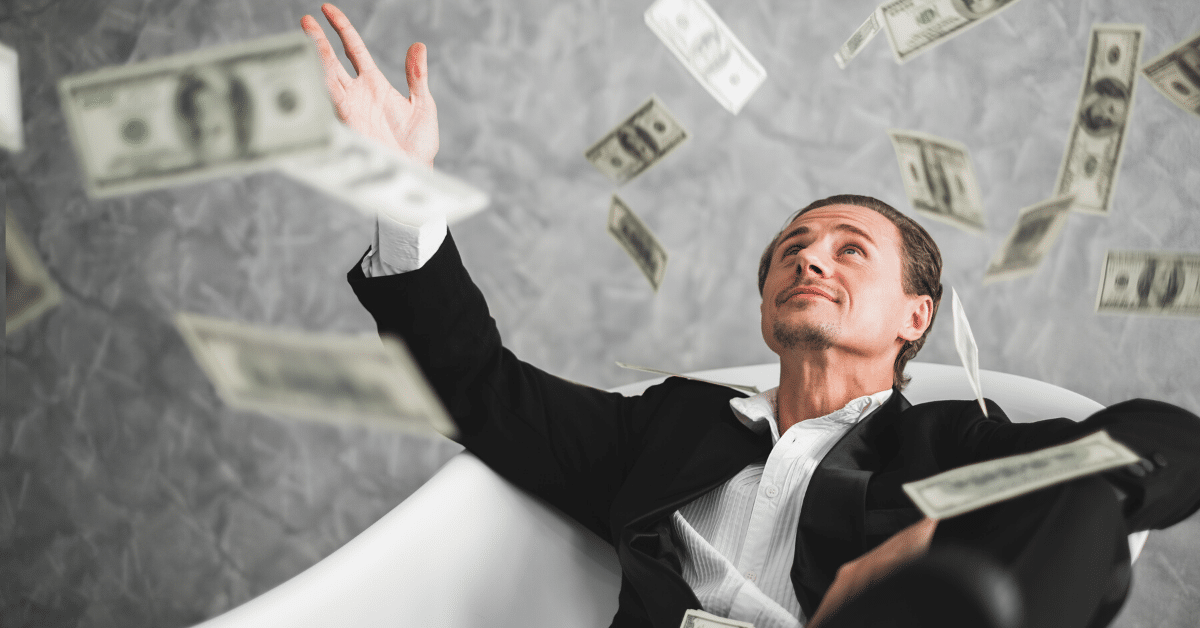 Every wealthy person has some financial advice that they want to share with everyone.

They Tweet it, make a whole speech on IG, or even Tik Tok it to some music and maybe a dance.

Whatever the case may be, they are desperate to tell you all about it.

And not about how you make it either.

Let me show you how much I have, and you don’t.

Let me show you how much money you will never see in your life, but make you think it’s going to happen.

This type of crap happens to millions of people daily, and there is not a single dang good thing that comes out of it.

But if you’re not careful, these rich folks might make life a lot more complicated than you think.

So before you go following the rich with your jaw dropped, here is why you should never take advice from most of them.

Contents show
1. They Will Teach You Poor Financial Habits
2. They Teach You to Dream
3. They Aren’t Financially Educated
4. Selling a Lifestyle
5. Most Use You
6. Most End Up Being Broke
7. They Spend Too Much
What the Rich and Famous Can Teach You
Be Humble
Hard Work Always Pays Off
Making a Nice Living is Possible
Conclusion – Follow the Rich and Famous Wisely

1. They Will Teach You Poor Financial Habits

They see the glory, but they don’t know the story.

A lot of successful BUSINESSMEN use that line.

But it is also used by professional athletes and others that make a lot of money.

With that reckless mentality and want to conform to the crazy world we live in, they go out there and act a fool.

“Look at how much money I have.”

“I’m not doing this to show off but rather to show you how I make my money.”

They do this to show off, and they have you thinking it’s okay to do when it’s not.

As an individual looking to make more money, this type of behavior is what you want to avoid.

I mean, what does laying out a million dollars on a table or carrying it in a gym bag do?

Does it show others how to make money?

Does it show them how to invest?

It teaches you absolutely nothing.

It then makes you drool and leads me into the next reason you should never take advice from some of the rich people out there.

2. They Teach You to Dream

Dreaming is cool and all, but it requires one other thing that most of us aren’t even good at doing.

Without that other piece of the puzzle, you will be nothing more than a dreamer.

Dreaming of Lamborghinis and mansions.

You are thinking about how you’re going to be financially free and be your boss.

It feels great and all, but to most, that’s about where everything stops.

That’s also the same reason why there’s only 1% of successful people out there.

So keep looking at all these rich people for “motivation,” but remember that a business is not going to start itself.

It is sad but true, especially with the people we look up to the most.

Those that are usually in some kind of sport that we enjoy.

Not to say that professional athletes aren’t smart because they are a lot smarter than most.

They usually come from an elite college that requires their GPA to be above average, or they simply can not play.

Now when it comes to managing money, you can bet that they were not prepared to handle the chunk that is about to be in their bank account.

All that’s in their mind is how they’re going to get their mom a new house.

Along with that Lamborghini, they dreamed of since they were a newborn.

That’s inspirational, but when you see the number of bankrupt athletes, it makes you see the bigger picture.

From someone, you once looked up to, to someone who is struggling just to eat.

It’s sad, but it does happen a lot more than we think.

They either retire and go broke or figure something out like George and create the George Foreman grill.

Learning how to play a sport and be good at it is the same as making money.

It requires lots and lots of experience, but most especially that same passion.

And more reason for you not to follow the rich.

If you even attempted to try and make money on the internet, you will get bombarded with more ads on the kazillion ways to do it.

Every single person running that ad is doing so because of one thing and one thing only.

No, they don’t want to help you, and no their “systems” will not work.

In some cases, they are Ponzi schemes disguised with some kind of product that doesn’t work.

These people pay for those ads because they can make more money from you.

“Take this free book,” so I can sell you my overpriced course after that may or may not show you how to make money.

That’s how they work and all because you let your emotions get the best of you.

Forget about the fancy cars and wads of cash.

If you buy their product, you are buying into hopes and dreams that you most likely will have to sell for you to make the kind of money they flaunt.

I’m not saying that you can’t make money with what they have to offer, but please do stay away from anything that promotes the crazy lifestyle.

Thanks to the digital world, more and more millionaires exist.

Forget about opening up a store and paying thousands of dollars on overhead costs.

Open up a digital something and let the low price of a website or free social media outlet make you money.

And yes, that’s probably the best way to make a living.

I do it, and so do many others.

Now the problem is not that.

It’s the fact that every famous person out there uses you as their way to make a living.

They show you more of the money they make, and you give them more likes to boost their income.

That’s how the online rich make their money and one that most of you are considerable contributors to.

Making money online is great, but not when people are using others to make it for them.

Now, if they are providing some kind of value, then maybe it’s okay to follow them.

And no, this does not include some motivational speakers as they too need you for them to make money.

6. Most End Up Being Broke

Most famous people end up becoming broke, but this does not include real rich people that had to invest.

You know, Bill Gates and Jeff Bezos type of rich.

Professionals are more of a candidate for this kind of stuff.

They make millions of dollars, and they make their living doing what they love.

The problem lies in what they do after they’re finished doing what they love. When that love that once provided, isn’t paying anymore.

Add that to poor spending habits, and you have the recipe on how to be broke.

Many athletes end up getting a regular job that it almost hurts, just like when Terrel Owens did some modeling to make some money.

From being arrogant on the field to have to wear a wig?

Don’t have any sympathy for them, though, as they are only HUMAN just like you and me.

Only they can have money, and you should hold a regular job?

That’s not how it works.

When times get tough, it makes you do some crazy things, especially when you were once a part of the rich and famous.

As a pro in anything else but making money, it’s probably wise to get some financial expert regardless of how knowledgeable you think you are about money.

7. They Spend Too Much

That is nowhere far from the truth and the biggest problem any average person has.

Especially if you never had a lot of money and you all of a sudden win the lottery or something.

You are the worst person to handle a lot of money, and you can even ask these lottery winners who went broke.

As a wealthy person who knows how to make money, you will NEVER find them throwing money away.

They are usually very frugal and probably spend less money than you do.

Heck, you may have seen the world’s cheapest millionaire.

She’s a bit extreme, but it can show you that making millions of dollars does not mean you should buy useless things.

What the Rich and Famous Can Teach You

Rather than listening to what they have to say, it’s a better idea to stay away.

If you do happen to follow and listen to what they have to say, maybe you can do the complete opposite.

Let them do the flaunting, but try to see what you can take away from all the green you see as they can teach you some valuable lessons.

The most successful people that should be giving you advice are not giving it.

They’re quiet as they are too busy making money.

Remember now; these financial teachers are doing what they do because well, you will make them money.

So when you see someone trying to “teach” you, keep that in mind as they are usually making their money by showing you how to do it.

Now, if they are teaching you how to start a business, then you best pay attention.

Most wealthy people have put in their share of work, and it’s something that you can copy.

If you’re not the best athlete out there, so be it.

Find something else that you are interested in and make money doing that instead.

With something like the internet, there are several legit ways to make money online that can have you making more money than your day job.

Put that work into something reachable, and you will see some pretty good results.

Find that one thing, and give it everything you’ve got.

If you’re going to half-ass it, you simply will not make it.

Making a Nice Living is Possible

The main thing you can take away from the rich and famous is the fact that ANYONE can make lots of money.

I don’t care who you are, where you live, or what kind of financial background you have.

There is money to be made.

You might not get famous, but you can make lots of money.

Remember that all these people you look up to are nothing but regular human beings just like everyone else.

I think it’s very dumb to follow any rich person who does nothing but show how much money they have.

They will take up too much space that the memory card on your brain already doesn’t have.

Do follow those that don’t talk about making money.

Get motivated, but please do not spend the rest of the year smiling with excitement and not taking any action.

Find something you are interested in, maybe start a blog about it, or make some videos on YouTube.

Get out of your comfort zone and, most notably, put in the work that is needed for you to succeed.

Follow the rich and the famous that aren’t humble, and you will be chasing that dream for as long as you live.